Fromin natural spring water from the Artesian well meets the strictest standards and criteria specified by law regarding to mineralization and microbiological purity of water without chemical treatment and filtering. It is therefore not modified in any way or irradiated by UV rays. 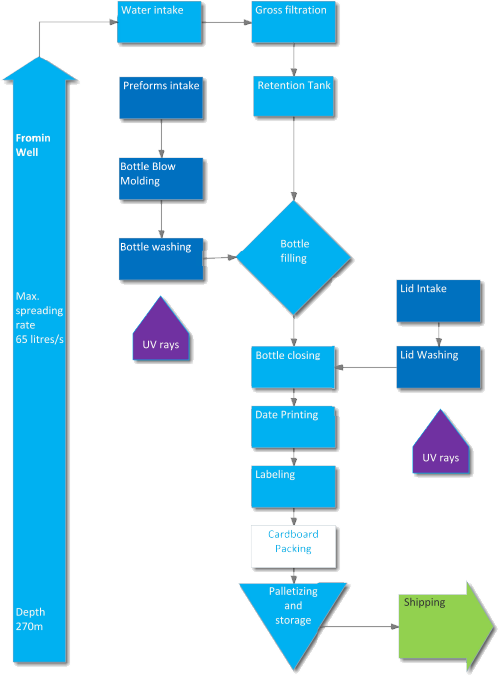 From a geographical point of view, the area around the collecting borehole is a part of the Českolipská Basin (the area around the Česká Lípa city, Northern territory of Czech Republic), which was created by a tectonic fall of rock blocks in the Czech cretaceous basin. The subterranean water comes from a formation of quartz sandstone of the Jizerské (mountains) formation with distinct block separation (the so-called cuboidal sandstone) from the depth of 160-280 m under the present surface level. The creation of the quartz sandstone formation is related to the settlement of mostly sandy material in the cretaceous sea for approximately 10 million years. During this time the predominantly sandy deposits reached a thickness of up to 400 m. The age of the rock that is the source of the subterranean water in the well is estimated at 88-90 million years.

The source of this subterranean water is atmospheric precipitation, which gets into the horizon of the aquiferous layers of cuboidal sandstones from the area of the Lužický fracture, where cuboidal sandstones reach the surface. This area is about 9-10 km northeast from the collecting borehole. The aquiferous horizon of the cuboidal quartz sandstones is slightly aslope from northeast to southwest and at the top and around the base it is isolated from its surroundings by impermeable claystone and marlstone. Superjacent impermeable rock thus creates the so-called artesian ceiling.

This means that subterranean water caught by the collecting borehole under the artesian ceiling flows out under the pressure of the water column in the aquiferous formation above the surrounding terrain. Water from atmospheric precipitation that sinks into the slightly aslope formation of the sandstone streams very slowly through the spaces in the sandstone grains and along the fissures in these sandstones, until it finally gets to the erosive channels of the Ploučnice River, wherefrom it then naturally springs into the surface stream of the Ploučnice and its tributaries. The speed of the stream in the horizon of the quartz sandstones is very slow and it reaches values in cm to m/year. Subterranean water from the horizon of cuboidal quartz sandstones of Middle Turonian age is much younger than the surrounding rock through which it flows slowly. This subterranean water is considered as young from geological point of view. Its age, which has been estimated on the basis of its flow velocity from the place of precipitation soakage into the quartz sandstone horizon in the area where the Lužický fracture runs to the collecting borehole, is around 10,000-15 000 years.

During the very slow flow of the subterranean water in the horizon of cuboidal sandstones of the Jizerské formation, the chemical characteristics of this subterranean water are influenced by maceration of mineral substances from the surrounding rock. Subterranean water thus has a neutral or slightly alkaline reaction, it is medium hard, its quality is quite stable and it matches the Ca, HCO3 type of water. This subterranean water is of very high quality, healthy for the human organism, free of all toxic substances and it meets all of the requirements of natural spring water.

Nowadays, when sources of surface water are constantly polluted, the huge and permanently renewed sources of subterranean water in the horizon of the Middle Turonian cuboidal quartz sandstones are of European importance. In the area of the collecting facility, which is located in the eastern built-up part of the city Česká Lípa, this source of high-quality water is separated from the surface by a powerful 160-metre horizon of claystone and marlstone. These rocks are impermeable and block the soakage of polluted surface water from the town's built-up area to the aquiferous horizon with high-quality subterranean water and thus they create a natural barrier against the pollution of subterranean water. The capacity of the collecting facilities supplied from the aquiferous formation of the quartz sandstones is usually quite high (approximately x.l/s – x.10/s). As for the Fromin collecting borehole, the current capacity determined by hydrodynamic testing is 65 l/s.